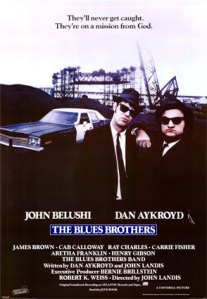 For those who have seen the film The Blues Brothers, the scene is a classic.  In order to evade the police in a high-speed chase, Dan Aykroyd and John Belushi use their car to bust into a crowded shopping mall, breaking through store windows and running over kiosks, with police cars still on their tail and adding to the damage.  When the scene ends, the mall is destroyed.  While this scene was staged, the mall in which it was filmed was real, and so was much of the damage.

The location for this shoot was the Dixie Square Mall in Harvey, Illinois, a southern suburb of Chicago.  Harvey had experienced significant economic decline in the 1970s, and the Mall suffered the consequences.  Business at the Mall dropped off, and crime escalated.  The Mall’s last tenets closed in 1979, and in the summer of that year the Mall was used for The Blues Brothers filming.  The damage created during the filming of this chase scene was never repaired, and except for a brief period when it was used for temporary classroom space by the Harvey-Dixmoor School District, the Mall has sat abandoned for over thirty years.

The abandoned Dixie Square Mall, however, has experienced new popularity on the Internet.  On such blogs as DeadMalls.com and Labelscar.com, the Mall is legendary and a key symbol of the general decline of the shopping mall in U.S. consumer culture.  In fact, when Gawker.com recently reported on this decline, it used a picture of this Mall at the top of the post (Nolan, 2010).  In addition to the online histories and critical blog posts about the Mall, photographers and videographers have captured the Mall’s deterioration in vivid imagery that they have posted on YouTube and Flickr.  Consequently, these networked texts resurrected the Dixie Square Mall as an Internet meme.

Our purpose in this project is two fold.  First, we wanted to recreate the Dixie Square Mall meme by publishing this project as a blog with hyperlinked posts, and embedded images and videos.  We acknowledge some limitations with this project.  We can only attempt to represent this meme, and could never exhaust all the possible postings on the subject.  The advantage of publishing this project online, however, allows the reader to also follow the meme by clicking on the links, visiting the other web pages, and viewing the images and videos themselves.  In addition, we have divided up the blog into several sections, which will allow readers to add their comments to specific points within the blog.

Second, we want to view this meme through a different critical lens.  Although the Dixie Square Mall may symbolize the decline of U.S. mall culture, we believe there is an implicit gender valence to the meme.  Specifically, we will argue that mall culture is coded as feminine, and that there is masculine pleasure to be derived from observing its decline.  More to the point, we will argue that the Dixie Square Mall symbolizes a feminine space that has been violated, and both this violation and subsequent deterioration is held up online for a scopophilic gaze.  We begin our project with a discussion of the literature on Internet memes, and how they are conceptualized.  We then review literature on scopophilia, and relate this literature to consumer culture generally and mall culture specifically.  We then provide a critical recreation of the Dixie Square Mall meme, in which we identify how the meme reasserts masculine power over a feminine space.

Please use the tabs above to navigate the discussion.